Hi all. I hope your lives are calming down from all the holiday craziness, and that things are going on back as usual. I know my life is, though it will be soon up rooted once again once the semester starts back up.

Today I would like to talk about what frustrates me the most when people respond to my statement that one day I would like to have a full time career as a photographer. It’s not “How are you going to support yourself?” or “I hope you have a back up plan” or “At least you took a some classes that could land you a practical job if that photography thing works out.” No these don’t bug me, at least not anymore, as I am very comfortable with my career decision. I know it’s going to be a lot of work, but this is what I love.

No, what bugs me the most is the phrase, “I hope one day you’ll be famous” or “You’ll be the next Annie Leibovitz.” I know all these people mean well, and are just being encouraging; however, I did not choose this career because I want to be famous. I love photography, and this is what I want to do for the rest of my life. Sure, it would be nice to be famous. But it’s not a goal. My goal is just to be able to make a decent living as a full time photography. Famous is probably 9th or 10th on the list of things I would like to accomplish with my life. And let me tell you it’s a short list… So it’s pretty far down there. If it happens, it happens. If it doens’t, well at least I accomplished everything else and I will be happy with that.

There are a lot of things I don’t know, but the one thing I am struggling with right now is selling myself. I am having this issue of trying to write this email to an event manager to see if I can get a spot as being one of the event photographers. I have this huge lists of reasons of why this would be a great opportunity for me to take photos at this event, but my list of why they should hire me… consists of nothing. Besides being cheap, why would a large event want to hire a student photographer? The only positive thing that currently sets me apart from the other photographers they have hired in the past is that I really want to shoot the event on film and on digital. It would provide them with a completely different feel to the photos. Films’ grains give a warmer, softer feel to photos sometimes then pixels. I would be the only one at the event shooting with film. Of course I would definitely have my digital camera with me as well to take pictures, as I can take a lot for very little cost on my end. And I’m not asking for a lot on their end. All I really want is a chance to shoot, and to have my room and travel expenses covered, which is a lot cheaper than hiring a photographer on for the full weekend. If anyone out there has any advice of selling oneself to a potential client please comment below. Any suggestions are welcome!

Alright, lots of printing has happened over the last few weeks. I have a few things to show you. First and for most is the quality of light photo project. This one stumped me, as it was hard for me to come up with different aways to create different lighting schemes. It wasn’t until the last few shots I really felt that I got into my grove, which really made me sad. It wasn’t until I found reflections in puddles after some rain that I found some really cool compositions. Here are the two she wanted me to print. 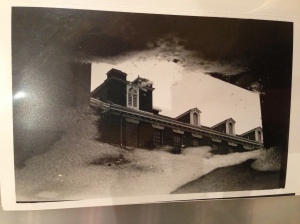 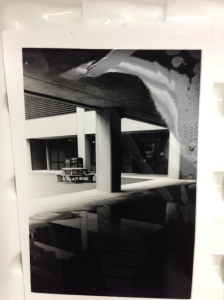 We also had a mini class discussion with her about some of us, including me, having a hard time shooting a roll a week. Within the projects we had, many of us had a hard time finding inspiration. She gave us two solutions to this problem. Her first solution was to let us start shooting subject matter that we want for the rest of the semester. For some people that’s portraiture. For other’s it’s completely forgetting about film and working on digital photography. For me, it’s ballroom dance. My rolls for the remainder of the semester will consist of dancers. Whether they be practicing, competing, or getting ready for competing, I will be taking their photos. Finally something I will enjoy. Though I will not be without my challenges. Studios, ballrooms, and the gym we practice in all have a lighting issue. So having a high enough shutter speed to capture good action shots maybe prove to be difficult.

The second solution was to go out during one class and do a mini shooting workshop around campus. Many people were having a hard time finding inspiration in around campus place that we walk around day in and day out. So she took her camera, and took us around to show us what we were missing. She showed us this really cool area where it was a courtyard which would lend itself to fashion photography. We also went to some warehouse type places to show us that even in the most unlikely places we could find interesting things to shoot, or interesting environments to shoot portraits in. Unfortunately, I did not get to take a lot of photos as I was helping out our teacher with her equipment. I think this was a great experience for all of us. It opened our eyes to what makes a good photography, and the process of getting that good photograph. It was much easier to adjust the angles that day as we were using her digital camera, and had instant feedback of what the picture looked like. You aren’t so fortunate in film. You have no clue how that picture is going to come out until you take the time to develop the roll, create a contact sheet, and print the picture.

Lastly, we had our midterm review on Monday. It went less then stellar. We found out as a class, we kinda suck at created good compositions. We also suck at picking out good photos out of our current portfolios. We also learned that we are putting way too much pressure on ourself with this class. She really does not care how we fulfill the project guidelines in terms of content, but as long as we shoot at least one roll of film per week. I am so glad I can finally focus completely on ballroom and dancesport photography. I also spoke with her and she has agreed to teach me how to use my fancy flash, as studios and ballrooms have very bad lighting. Hopefully I can get better, crisper action shots with the flash.

That’s all I have for now for photography. I have 2 rolls which I plan to develop this week, and 3 contact sheets to print. I’ve got a very busy week ahead of me for photography. See you next week!

Hello everyone! I hope you all have had a good week. So yet again, I am still further in painting than the other two studio classes that I am taking at the moment. In photography we shot one color roll so far just to make sure our camera’s work. I knew mine did but I had to shoot it anyway. I had the film developed at a CVS and they totally messed it up. The paper they used was fogged, meaning the pictures, though taken with a working camera and with sa person who is used to taking photos on full manual, looked under exposed. This made me incredibly angery, but I’m moving on. Also I learned the lense I used for this role is meant only for my digital camera. It causes a vignetting around the image. Lesson learned there. If you would like, I can make a serpate post about those two errors.

As for digital media, things are going slow. I am really not used to creating a whole new image out of nothing with photoshop. What this project entails is taking 5 scanned objects and turning them into a completely different composition. We need 3 of these compositions, meaning 15 total scanned objects. We have a critique next Wednesday and I am worried about it. I am really at a loss of what to do. But hopefully this weekend I can figure it out.

Okay, on to my painting class. On Tuesday we had to turn in the sketches that I had posted on last week. We also started on the 18×24″ canvas on Tuesday as well. I started out taking vine charcole, which is meant for use on canvas and paint, to get the general sketch out on the canvas. Then my professor came over, approved of my small scale sketch as told me to make the shoes on the canvas much, much bigger in order to really activate the canvas and the compostition. 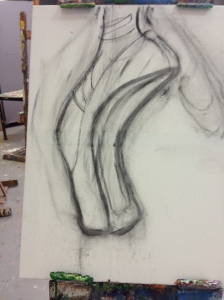 This is just the start out the outline I did in vine charcole. You can see all the renditions I did before I was satisfied with how it looked as a sketch. Next we started on the cartoon. Now this isn’t the normal type of cartoon you would normal think of in the newspaper. In painting, cartooning is laying on a layer of black paint, and only black paint. Now you may say, “Well, what’s the point of adding only black? Wouldn’t that that just make your canvas one giant blob of black that would destroy your sketch?” My answer, no. In cartooning, you dilute the paint, acryllic in this case, with medium. Medium is a viscus fluid that thins the paint and evenly distributes the pigment. Using only water to thin the paint would not distribute the pigment evenly. We cartoon the image in order to let the white stand out when we paint over the cartoon. It gives the white paint a chance to pop, instead of blending in with the white canvas. 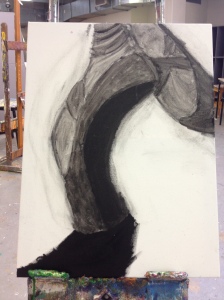 This image is of the beginning of the cartoon I did for this project. You can see a greyscale come out. This is from strict black paint, with only medium added. Today, I finished the cartoon and I started to add the first layer of paint to the image. We started out with figuring out where our blackest blacks would go, and then moving up the greyscale from there, all the way to the whitest white. I had a basic idea of where I wanted to go. As you know, I really do love putting movement, or the idea of movement in my art work. So I really wanted to explore that in this painting. So I really let the brush strokes come through. I tried not to blend them together, and just let the paint and the brush dictate the movement in the painting.  I think I am really starting to get that down in the painting. I still need to work on the painting a bit more. I think we are still working on it through next week, so we shall see where I decide to go with it. Below is where I left off today before I left class. Let me know what you think in the comments! 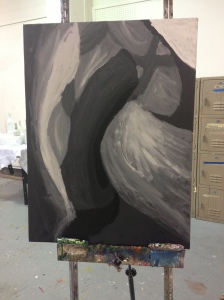